In ancient Athens, the olive tree was sacred, and was associated with the city’s protector, Athena, for as Cecrops said "it was Athena who first planted the olive tree". Over the years, the Athenians believed that the 12 olive trees at the Academy were pieces of the first tree, sacred and, as such, any attempt to destroy them was a most serious offense punishable by death. The oil from these trees was kept in the Panathinaika amphoras, to be given as prizes in the Panathenaic Games, so in a sense, it was returned as part of the worship of Athena, the Goddess who offered the precious gift of the olive tree.

According to Demosthenes, even cutting an ordinary olive tree for no particular reason was punishable by law. The Athenians believed so strongly that the prosperity of the city was related to the sacred tree that when the Spartans burnt the olive trees in estates around Athens, the Athenians stated that "war has become the cause of many other bad things ..." 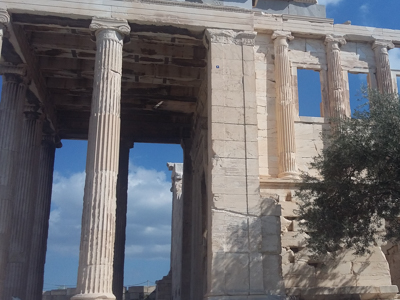